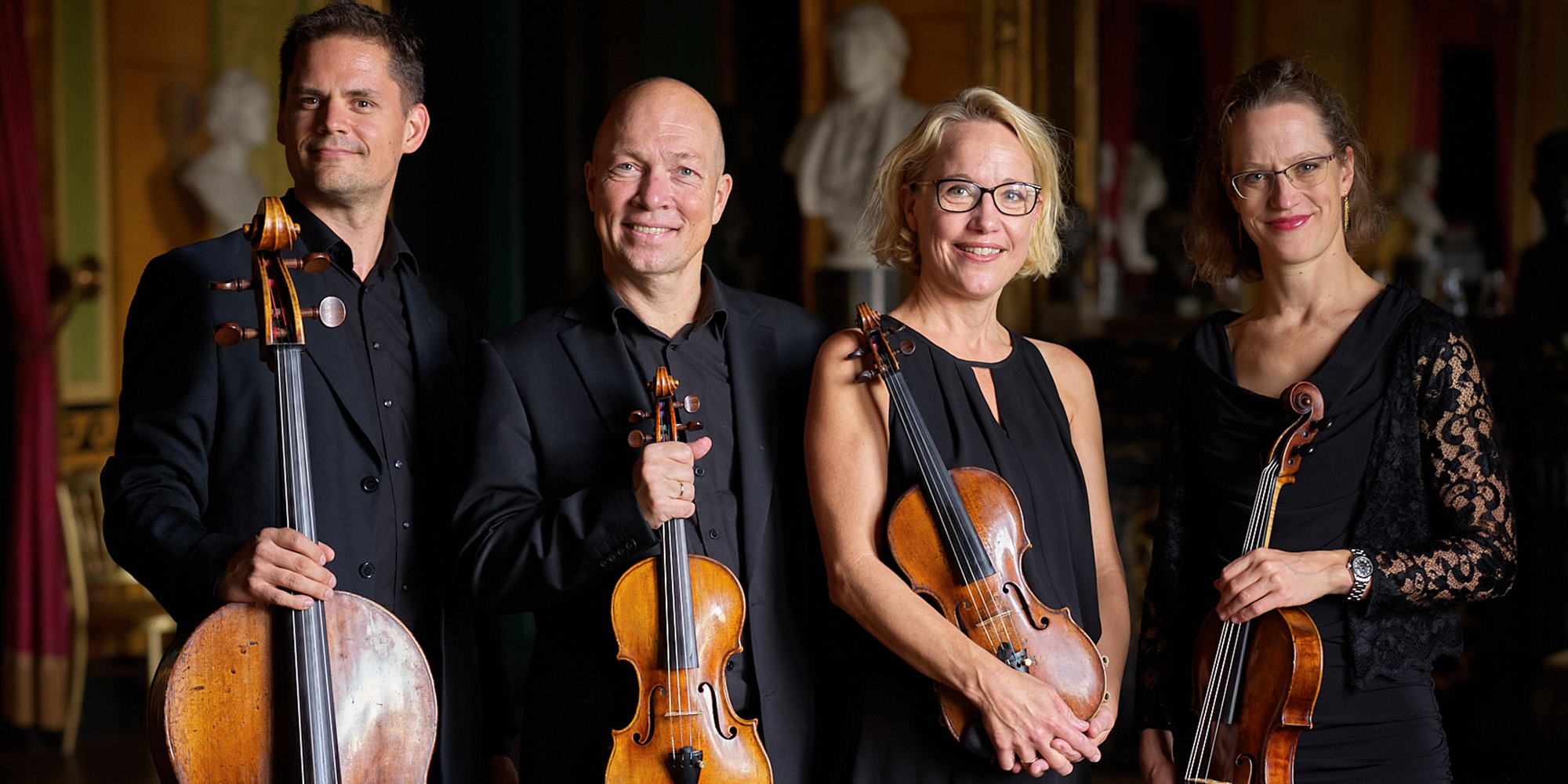 AN HONOUR TO MASTERPIECES

POSEIDON STRING QUARTET
JON GJESME, violin
CHRISTINE ENEVOLD, violin
MAGDA STEVENSSON, viola
JOEL LAAKSO, cello
The poet Goethe once expressed that a string quartet concists of 4 human beings who sits down and speak with each other.
After attending this concert you probably understand what he meant...
READ MORE
BUY TICKETS

The Poseidon Quartet was founded in 2007 by four leading and highly experienced chamber players and soloists and since then, the quartet has been sought after on the Nordic music scene...

In 2011 the Quartet released its first CD with string quartets of Schumann and Ravel, and in 2019 followed their second release with Grieg’s String Quartet Op. 27 and Brahms’ B flat major String Quartet Op. 67. The name of the Quartet derives from Greek mythology - Poseidon is god of the sea and the forces of nature. It symbolises the quartet’s striving to create different and contrasting musical atmospheres ranging from ferocity, temperement and crashing waves to tranquility, introversion and calm sea.

Jon Gjesme, 1st violin, was born in Norway. He has been a concertmaster for more than 20 years, of The Oslo Philharmonic, The Royal Danish Orchestra and, currently, of Copenhagen Phil and The Norwegian Radio Orchestra. He has performed as a soloist with some of the leading orchestras in the Nordic countries and in the US, working with conductors such as Paavo Berglund, Rafael Frühbeck de Burgos and Daniel Harding. As a chamber player he has toured in Europe and the Far East, and as a conductor, he has worked with The Oslo Philharmonic, Trondheim Symphony Orchestra and Copenhagen Phil. Mr Gjesme plays a 1737 Stradivarius belonging to Copenhagen Phil.

Christine Enevold was born in Denmark and is very active on the Danish chamber music scene. She was a founding member of the Hafnia Piano Trio, and as member of Duo Vivo, together with pianist Marie Rørbech, a prize winner in the 1998 Danish Radio Chamber Music Competiiton. She is currently leader of the second violins of the highly esteemed Danish Chamber Orchestra under chief conductor Adam Fischer.

Magda Stevensson was born in Sweden. She studied at The Royal Danish Music Academy in Copenhagen and with The Alban Berg String Quartet in Vienna. As a member of The Paizo Quartet, she has played numerous concerts in Europe, Japan and Australia. Today she is a member of The Danish National Symphony Orchestra, and she also appears with The Danish Chamber Orchestra under the baton of Adam Fischer.

Joel Laakso was born in Finland and has toured around the world as a member of New Helsinki String Quartet. He is currently principal cellist of The Royal Danish Orchestra and since 2019 a member of The Poseidon Quartet. He studied at The Sibelius Academy with Martti Rousi, Hannu Kiiski, Erkki Rautio and Marcel Bergman as well as at The Edsberg Institute near Stockholm with Torleif Thedeen. He plays a Nicola Amati cello belonging to The Royal Danish Orchestra.

The concert are situated in Korskirken - the Church of the Cross, a charming medieval church in the heart of Bergen City...

The artists also performEs at: